From May 1, after the amendments to the Law on Advertising have entered into force, the Lithuanian competition authority Konkurencijos taryba will transfer its functions relating to the supervision of misleading and comparative advertising to the State Consumer Rights Protection Authority (SCRPA).

Last year Konkurencijos taryba paid the attention of the Ministry of the Economy and Innovation to the importance of the consolidation of consumer protection functions and was ready to take on these functions itself. The Ministry decided that the supervision of misleading and comparative advertising should be transferred to the SCRPA.

This year in March the Seimas approved the amendments not only to the Law on the Prohibition of Unfair Business-to-Consumer Commercial Practices, but also to the Law on Competition, the Law on the Provision of Information to the Public and the Code of Administrative Offences, related to the upcoming changes.

Although from May 1 Konkurencijos taryba will not conduct the supervision of the Law on Advertising, it will continue two investigations into the actions of pharmacy chains which were launched in 2018 and 2019. Both decisions are expected to be adopted this year. The authority is also going to resolve complaints and notifications on misleading and comparative advertising received by 1 May 2019.

Complaints which Konkurencijos taryba receives after May 1 will be dealt with by the SCRPA. The authority‘s experts are ready to share their investigation and litigation experience with the institution in charge of the aforementioned function.

In 2001–2018 Konkurencijos taryba imposed fines totalling EUR 625,415 on 96 companies. Some of them infringed the Law on Competition several times.

Since 2013, when the amendments to the Law on Advertising entered into force and Konkurencijos taryba gained new powers to send warnings to undertakings asking them to terminate allegedly misleading advertising, a considerable amount of efforts was devoted to prevention. The authority prepared the Guidelines on Misleading and Comparative Advertising, as well as Recommendations on Price Comparisons. The aforementioned documents explained the rules that businesses have to comply with so that not to infringe of the Law on Advertising. By examining advertisements of different kinds on its own initiative, Konkurencijos taryba also sought to inform undertakings about current legal requirements. Having noticed that the advertisements might be misleading, the authority sent warnings to companies asking to change allegedly misleading advertisements or stop their dissemination. Failure to do so would usually result in investigations and fines on undertakings.

In 2013–2018 Konkurencijos taryba examined 2376 advertisements and sent 1036 warnings regarding allegedly misleading advertising. The majority of companies agreed to comply with the authority‘s requests. 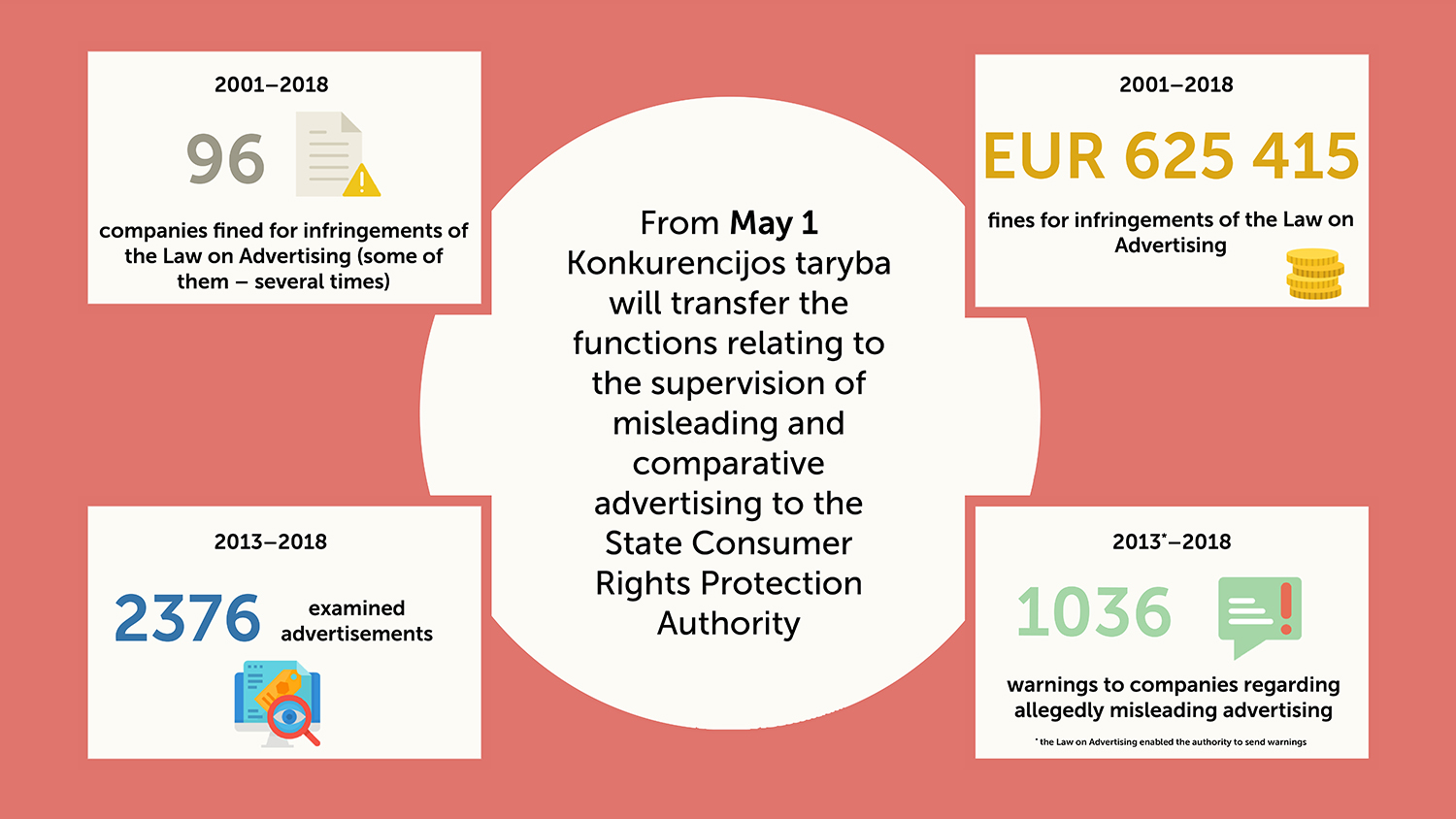