Seimas adopted amendments to the Law on Competition and the Law on Local Self-Government initiated by the President of the Republic of Lithuania. From 1 January 2017 public administrative bodies will face fines for competition law breaches and stricter regulation related to economic activities carried out by municipal companies.

Public administrative bodies are granting privileges to certain municipal companies and discriminating against other undertakings too often. Such conduct shows total disrespect to the principles of fair competition. As a result, consumers lose their right to choose high-quality services at the lowest price. Hopefully, the amendments will encourage public administrative bodies to eliminate competition restricting decisions and deter from adopting them in the future

According to the amendments of the Law on Competition, for a breach of Article 4 of the Law on Competition public administrative bodies may get a fine of up to 0,5 per cent of their annual and other income. The fine, however, should not exceed sixty thousand euros. The amendments will also enable the Council to apply interim measures and oblige public administrative bodies to terminate illegal actions or perform certain actions necessary to avoid harming other undertakings or the society.

Amendments to the Law on Local Self-Government will prevent municipalities or municipal companies from engaging freely in economic activities, which, so far, has often resulted in competition restrictions. If during a competitive procedure it turned out that no private undertakings are able to provide certain services, with the permission of the Council, the municipalities will be able to authorize their companies to provide these services. This way municipalities will be encouraged to serve not only their own interests, but also those of the society. 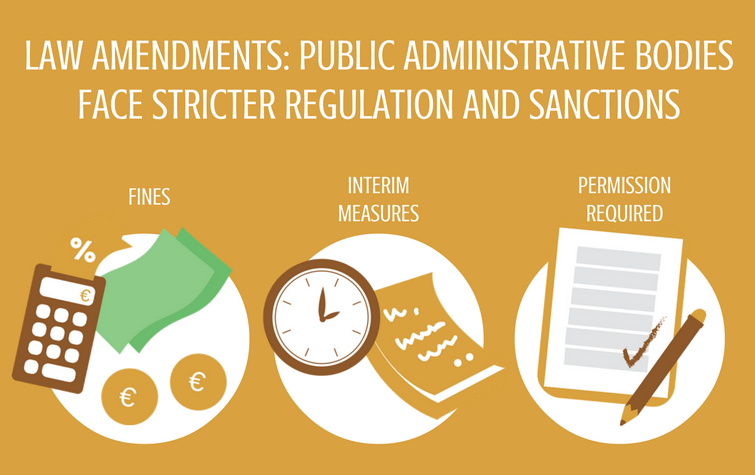