CHAIRMAN OF THE COMPETITION COUNCIL: NOT ONLY IMPOSING FINES BUT ENSURING EFFECTIVE COMPETITION AND PREVENTION OF INFRINGEMENTS IS OUR MAIN GOAL 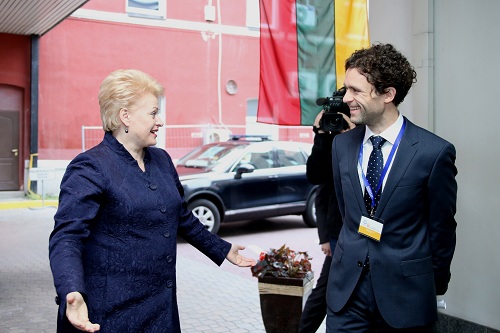 The President of Lithuania opened the European Competition Day in Vilnius (Photo by Dž.G. Barysaitė)

On October 3, the European Competition Day was marked in Vilnius. The list of speakers included the president of the Republic of Lithuania, Dalia Grybauskaitė, Vice President and Commissioner for Competition, Joaquin Almunia, heads of Belgian, French, Netherlands and Swedish competition authorities, a representative from Microsoft Corporation as well as competition law practitioners and academics.

Business becomes more global than it used to be and it requires broader approach and more coordinated actions of competition authorities. Thus European Competition Day offered us an opportunity to share the latest information on competition law, exchange views and learn about the most interesting antitrust enforcement practices. Reduced roaming tariffs, new banking guidelines, opened proceedings in the energy sector are just a few tangible results of European competition authorities.

Currently the Competition Council of the Republic of Lithuania (Council))  works on 25 investigations related to various spheres of life: public transport, distribution of films, activity of petrol stations, production and sales of bear, production of biofuels well as waste management   and these are just few of areas to be mentioned.

The analysis based on detailed calculations revealed that the direct benefit to consumers brought by the Council constitutes LTL 45,72 millions per year and, thus, exceeds the Council’s  annual budget by more than 13 times.

„Though very often the Council is identified with fines alone, professional investigations and the benefit they bring to consumers, consistent preventive work in the meetings with the media, communities of business, law practitioners and academics as well as publically announced resolutions are the most important. We seek for an open and trustworthy dialogue with undertakings, public administration entities and community of law practitioners and academics, with the media and all the people of Lithuania.” – says Šarūnas Keserauskas, the chairman of the Council.

The experts of the Council prepare a lot of explanatory legal acts and put their projects forward for public consideration. Once adopted, the legal acts are presented to business and public administration entities as well as associations.

These sincere efforts bring significant results of European importance and encourage us to move forward and even more effectively safeguard the principles of fair competition for the sake of public interest and the well being of each and everyone.

EXPERTS OF KONKURENCIJOS TARYBA SHARED EXPERIENCE WITH COLLEAGUES FROM UKRAINE

REAL ESTATE AGENCIES AGREED NOT TO COMPETE FOR CLIENTS AND EMPLOYEES