On 7 October 2022 the Lithuanian competition authority Konkurencijos taryba is organising an international conference to mark its 30th anniversary.

The event, which will be opened by the Prime Minister Ingrida Šimonytė, will bring together competition law practitioners, academics, politicians, representatives of the public and private sector from Lithuania and abroad. The two-part conference will focus on the development of competition policy in Lithuania over the last three decades and the role of competition in the future, considering more and more frequent attempts to solve competition issues with regulation.

Former Chairpersons of Konkurencijos taryba Rimantas Antanas Stanikūnas and Jūratė Šovienė, the latter of whom is now Chair of the Council of the Lithuanian Communications Regulatory Authority, as well as the business representatives Giedrė Kaminskaitė-Salters, Head of Sales & Customer Care at Telia Lietuva, Agnė Selemonaitė, Chair of the Board at ConnectPay, and Ignas Staškevičius, co-founder of VP group, will share their insights during the first panel discussion 'Is this the competition we've been fighting for?'.

After the keynote speech 'Reports of competition's death are greatly exaggerated' delivered by Olivier Guersent, Director-General of the European Commission's Directorate-General for Competition, the event will continue with the panel discussion called 'Competition is dead. Long live regulation!' joined by the following panelists: Konrad Ost, Vice President of the German Federal Cartel Office (Bundeskartellamt), Martijn Snoep, Chairman of the Netherlands Authority for Consumers and Markets, Marius Jurgilas, Member of the Board of the Bank of Lithuania, as well as Assimakis Komninos, Partner at law firm White & Case LLP (Brussels, Belgium).

The event will be moderated by Šarūnas Keserauskas, Chairman of Konkurencijos taryba.

The first part of the conference will be held in Lithuanian (with translation to English). The second part of the discussions will take place in English.

Registration to the conference is available by e-mail contacts@kt.gov.lt by 30 September. Please note that the number of places for the event is limited. 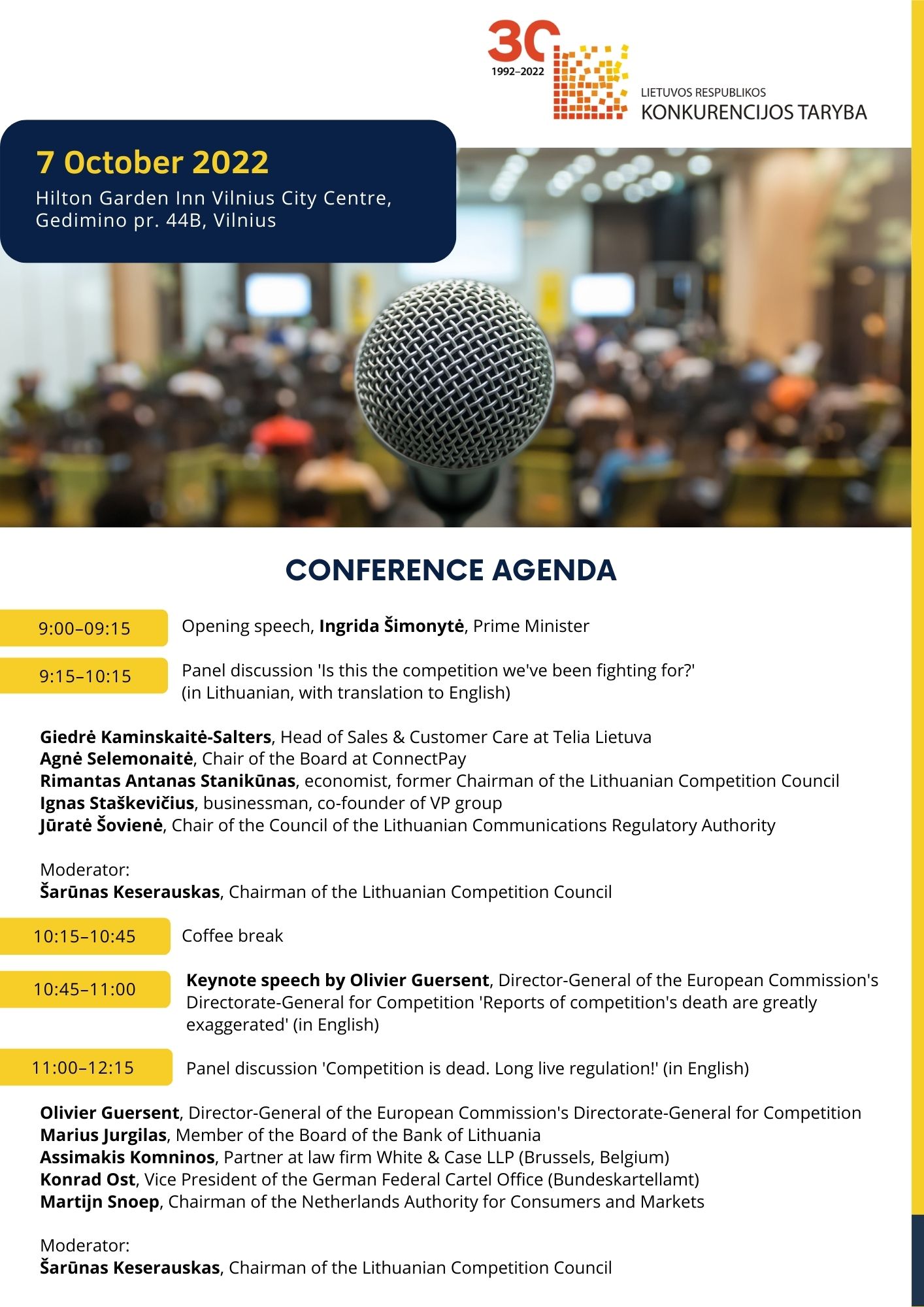 COMPETITION IN PUBLIC SERVICES: SEARCH FOR BALANCE AND PROPORTION